In 1868 the British launched an attack on Ethiopia in order to free two of its representatives and several missionaries held hostage by Emperor Tewodros II. They landed on the Eritrean coast at Zulla. The etching below appeared in the Illustrated London News of 14 March 1868.

Below is an extract from the Wikipedia entry on the subject.

The British Expedition to Abyssinia was a rescue mission and punitive expedition carried out in 1868 by the armed forces of the British Empire against the Ethiopian Empire. Emperor Tewodros II of Ethiopia, then often referred to by the anglicized name Theodore, imprisoned several missionaries and two representatives of the British government in an attempt to force the British government to comply with his requests for military assistance. The punitive expedition launched by the British in response required the transportation of a sizable military force hundreds of miles across mountainous terrain lacking any road system. The formidable obstacles to the action were overcome by the commander of the expedition, General Sir Robert Napier, who was victorious in every battle against the troops of Tewodros, captured the Ethiopian capital, and rescued all the hostages. The expedition was widely hailed on its return for achieving all its objectives.

In the eyes of Alan Moorehead, “There has never been in modern times a colonial campaign quite like the British expedition to Ethiopia in 1868. It proceeds from first to last with the decorum and heavy inevitability of a Victorian state banquet, complete with ponderous speeches at the end. And yet it was a fearsome undertaking; for hundreds of years the country had never been invaded, and the savage nature of the terrain alone was enough to promote failure.”[14]

The task was given to the Bombay Army, and command of the expeditionary force to Lieutenant-General Sir Robert Napier. This was a very unusual decision as it was the first time a campaign had been entrusted to an officer from the Corps of Royal Engineers,[15] it was also a very sensible decision, as the whole campaign would rely on engineering skills to succeed.[16] Intelligence was carefully gathered about Ethiopia while the size of the army was calculated and its needs estimated before a massive effort begun to meet them. “Thus, for example, forty-four trained elephants were to be sent from India to carry the heavy guns on the march, while hiring commissions were dispatched all over the Mediterranean and the Near East to obtain mules and camels to handle the lighter gear. A railway, complete with locomotives and some twenty miles (32 km) of track, was to be laid across the coastal plain, and at the landing place large piers, lighthouses and warehouses were to be built.”[17]

Given the long supply lines and limited resources of their own, the British understood that they were extremely dependent on a constant and reliable local supply of food for the men and forage for the animals. Accordingly, they decided to not plunder along the route but instead to pay for all needed supplies. To this end, the expedition took with them a sizable sum of the most commonly used currency in 19th century Ethiopia, the Maria Theresa Thaler.[7] 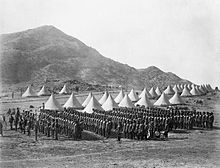 The Baloch Regiment in camp 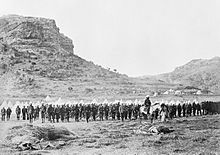 The force consisted of 13,000 British and Indian soldiers, 26,000 camp followers and over 40,000 animals, including the elephants. In addition, there was a sizable contingent of embedded journalists, including the journalist Henry Morton Stanley as well as several European observers, translators, artists and photographers. The force set sail from Bombay in upwards of 280 steam and sailing ships. The advance guard of engineers landed at Zula on the Red Sea, about 30 miles (48 km) south of Massawa, and began to construct a port in mid-October 1867.

By the end of the first month they had completed a pier, 700 yards (640 m) long; they completed a second one by the first week of December. The railway was already reaching into the interior, with eight iron girder bridges built.[18] At the same time an advance guard, under Sir William Lockyer Merewether, had pushed up the dry bed of the Kumayli River to the Suru Pass, where again the engineers were busy at work building a road to Senafe 63 miles (101 km) long, rising to 7,400 feet (2,300 m)[19] for the elephants, gun-carriages, and carts.[20] The demand for water was enormous; the Zula camp using 200 tons a day, which was created using condensation from steamship boilers in the harbour.[19] As the force moved inland, wells had to be dug.

The British launched their attack on the Emperor’s fortress at Magdala, which was captured. The Emperor committed suicide and his son, together with a good deal of the contents of the fortress, and the freed captives, were returned to Britain.