On 1 April, the ninth anniversary of the start of Ethiopia’s Grand Renaissance Dam (GERD project, Prime Minister Abiy Ahmed affirmed the country’s plan to start filling the dam in July. “The current coronavirus outbreak should not hinder us from completing the project,” he added, calling the dam a symbol of “sovereignty and unity.”

Ethiopia’s plans to go ahead with its filling schedule have predictably heightened tensions between Addis Ababa and Cairo. Relations were already tense after failed negotiations in Washington earlier this year.

At Cairo’s request, the negotiations between the three countries (including Sudan) moved to the United States in the hope that an agreement would be in place before Addis Ababa completed the dam.

“In negotiations you can’t win everything but there is minimum you obtain. We seek to achieve sustainability of water, especially during the times of drought and extended drought,” Egypt’s water minister said in a TV interview.

A gaffe by Trump in the middle of the talks, where he claimed to have solved a geopolitical issue that someone else (presumably PM Ahmed) was awarded for, had muddied waters right from the start.

Ethiopia’s Foreign Minister Gedu Andargachew referred to the US statement as interference and disrespect to Ethiopia’s sovereignty.

“The US shifted its role from an observer to a decision-maker in the dispute that should have been left for the three countries to hammer out a settlement that would be acceptable by each country,” he told a press conference in Addis Ababa.

In its resolution, the foreign affairs ministers affirmed the League’s position on “infringement against Egypt’s historical rights to the water resources of the River Nile” and endorsed the US-mediated deal. -Nile

Ethiopia asked its neighbours, Djibouti and Somalia, to ‘clarify’ their positions on the Arab League statement, which they had both signed. Of Ethiopia’s six neighbours, only two – South Sudan and Kenya – have no connection to the League.

Eritrea maintains an observer status both in the League and the Nile Basin Initiative which brings together the upstream Nile countries.

Back to the drawing board

The failure of the US-mediated talks forced Cairo to go back to the drawing board. Its foreign affairs minister, Sameh Shoukry, was engaged in shuttle diplomacy for most of March, visiting Arab countries before returning to the continent.

In the span of just days, and in the middle of the COVID-19 outbreak, he visited South Africa, the DRC, Burundi, Tanzania, and Niger.

On the second leg of his African tour… Minister #Sameh_Shoukry now meets with South African President #Cyril_Ramaphosa to deliver President Al-Sisi’s message regarding developments on the GERD, as well as discuss several bilateral and regional issues 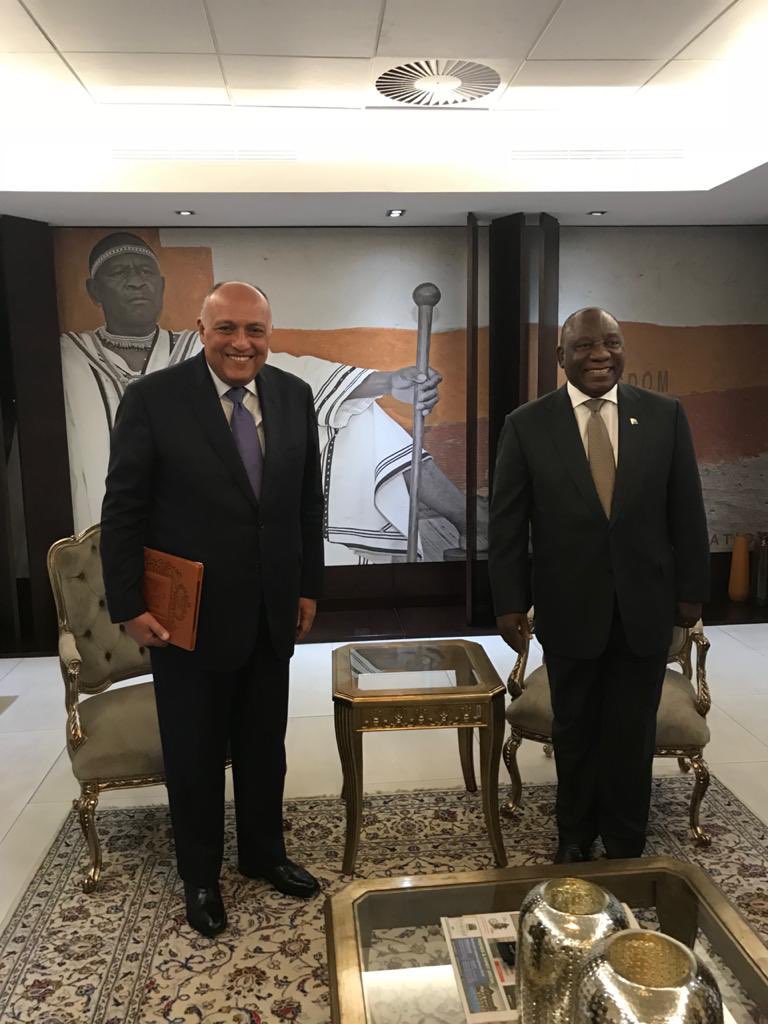 37 people are talking about this

With global diplomacy at a standstill while the world deals with the coronavirus pandemic, the lack of a comprehensive agreement, and the extensive propaganda on both sides, means that the Nile crisis risks becoming an all-out war.

Time is running out

Sudan’s Prime Minister Abdalla Hamdcok has promised to kick start negotiations (again) because “the issue of the Renaissance Dam is very urgent and should continue to be negotiated once the world has overcome the Corona pandemic disaster.”

But conservative estimates of the global pandemic suggest that it will take several more months before things can start to feel normal again. Meanwhile, Ethiopia’s plan to start filling the dam is looming not far ahead in July.

The Nile dispute is a do-or-die for both Egypt and Ethiopia.

Egypt’s economy and society was built on and still relies on the Nile water, which mainly originate from Ethiopia.

In Cairo, both politicians and the media have said that Ethiopia’s intentions with the Nile are not about electricity generation, with one online commentator saying “her [Ethiopia’s] goals are different from the announced ones.”

The Egyptians also accuse Ethiopia of taking advantage of the Arab Spring to begin construction of the dam, a time when Cairo’s leadership was largely in disarray.

Ethiopia, on the other hand, first worked with the other upstream Nile countries starting in the late 1990s to demand an equitable share of the river’s waters.

When it begun constructing its dam in 2011, Meles Zenawi’s administration also made sure it would be intricately linked to the country’s future. The dam was largely funded by the Ethiopians themselves, and built by the military’s conglomerate (METEC) until several contracts were re-awarded after PM Ahmed came to power.

This makes it a national issue that even Abiy’s opponents are not willing to disagree with Addis Ababa on.

“We and all in opposition camp support the Ethiopian government’s position in the negotiations as long as it is based on maintaining our national interest, without harming Egypt,” said Yeshewas Assefa, the chairman of Ethiopian Citizens for Social Justice, an opposition party.

Open letter from the diaspora

In an open letter to Egypt on April 6th, Ethiopians in Canada wrote that[1] : “It is mutually significant for Egypt to come forward to support Ethiopia’s tree planting initiative and eradication of Water Hyacinth from Lake Tana.” They also referred to the colonial-era treaties on the Nile as “unjust, morally selfish, and politically bankrupt ” before adding that “Ethiopians consider war as a last resort.”

Bottom line: As things stand now, nothing has changed so far in 2020. Ethiopia still plans to start filling the dam in three months. Egypt insists that it will do whatever it takes to get concessions, and both sides have not ruled out the possibility of war.

But while both sides try to work on diplomatic support in the middle of a global pandemic, there’s a real risk that tensions could escalate, and with that not just the politics of the Nile, but peace in the region.