Once a formidable force that commanded the respect of the US, the Ethiopian army has suffered such heavy losses on the front lines that the government has taken the extraordinary step of calling on ordinary citizens to join the war against the Tigrayan rebels.

It marks a dramatic change in the military’s fortunes.

A year ago it ousted the Tigray People’s Liberation Front (TPLF) as the ruling party in the northern Tigray region – now the group’s fighters are taking towns on the way to the capital, Addis Ababa.

“Then they went into combat to finish it off.”

However, Achamyeleh Tamiru – an Ethiopian economist and political commentator – believes the TPLF’s advances are only “temporary”.

“Ethiopians from all walks of life are rising to defend and salvage Ethiopia,” he said.

The tactics of the TPLF fighters remind former BBC Tigrinya editor Samuel Ghebhrehiwet of his life as a young Eritrean guerrilla who, alongside Tigrayans, fought Ethiopia’s Mengistu Haile Mariam regime until it was overthrown in 1991.

They were “lightly armed, highly agile, living on survival food, and showing deep resilience and determination”.

Eritrea went on to win its independence, while the TPLF took power in Ethiopia – though its political dominance came to an end in 2018 following mass protests.

Its leaders retreated to Tigray from where the group fired the shots in the current conflict in early November 2020 by launching an assault on a federal military base with the support of loyalists in the army – including commanders and soldiers – who then defected to its ranks.

Not only was a huge stockpile of weapons seized, but high-ranking officers and soldiers who resisted were killed or captured in their thousands.

“The night-time attack on the base has effectively created a vacuum that literally makes Ethiopia without a federal army,” Mr Achamyeleh said.

However, the military – with crucial help from the Eritrean army, and forces and militias from Ethiopia’s Amhara region – overcame the setback, launching air strikes and a ground offensive that led to the TPLF being dislodged from power in Tigray in under a month.

But, Mr Samuel said, as they committed widespread atrocities against civilians – including raping, killing and burning crops – Tigrayans from “all sections of society then joined the TPLF to protect their dignity”.

According to Mr Roble, former generals who had retired or defected went to Tigray’s mountains and caves to form the Tigray Defence Force (TDF) as the TPLF’s military wing to ensure that the tens of thousands of new recruits were well organised.

“These generals felt it was their duty to protect the citizens of Tigray. With their inside knowledge of the army they plotted its defeat,” Mr Roble said.

With Tigrayan fighters now less than 300km (185 miles) from the capital, it is clear they currently have the upper hand over an army that used to be one of the most powerful in Africa, he says.

“Ethiopia was America’s number-one partner in the so-called war on terror in the Horn Africa, especially in Somalia, where it overthrew the Union of Islamic Courts[a precursor of al-Shabab]. America funded the military, armed it, and even supplied its soldiers with ready-to-eat meals,” Mr Roble said.

“And the African Union relied on it for peacekeeping missions, but Ethiopia itself is now unstable and its military is a shadow of its former self.”

Trouble for the TPLF began when Prime Minister Abiy Ahmed took office in April 2018 after huge numbers of people from Ethiopia’s two biggest ethnic groups – Oromos and Amharas – staged protests against its 27 years at the helm of government. 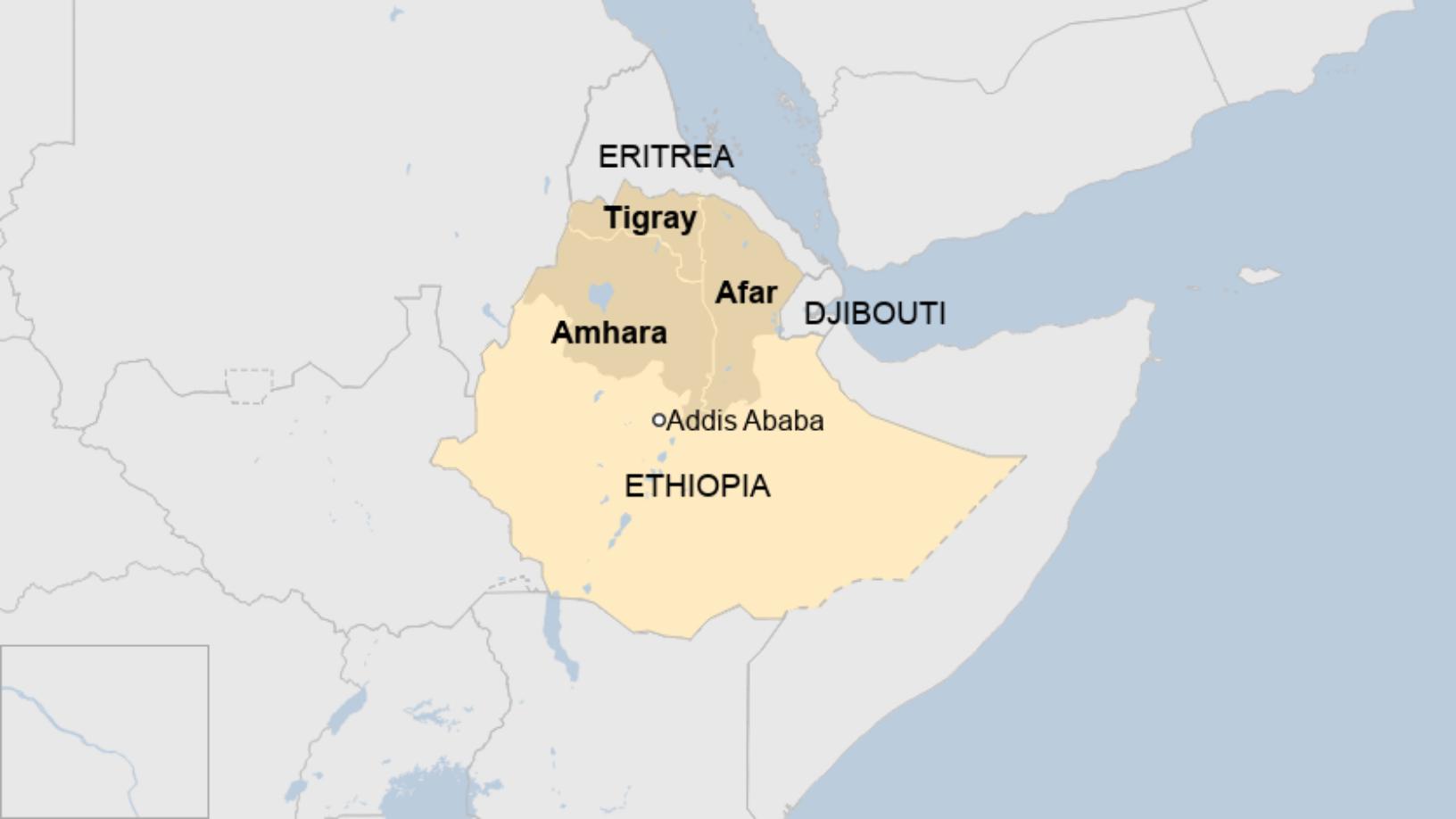 “Tigrayans make up only about 6% of the population and when the TPLF was in power, it created a federal system which gave ethnic groups their own regional states,” Mr Roble said.

“The TPLF felt Mr Abiy [an Oromo] wanted to centralise power. It caused a massive fall-out between them and eventually led to the war,” Mr Roble said.

Alex de Waal, executive director of the US-based World Peace Foundation, said that Mr Abiy also set out to overhaul the military to ensure it was loyal to him, and to address concerns about Tigrayan dominance.

“Tigrayans made up about 18% of the whole army, and about twice that in the officer corps. Their numbers were disproportionate compared to the size of the population. Mr Abiy started reforms to push out Tigrayans, and created an Emirati-trained Republican Guard loyal to him,” said Prof De Waal.

“The changes demoralised the army, and it ceased to be a cohesive force. Mr Abiy did not have time to reconstitute it before the war started.”

He said of the army’s 20 divisions, 10 – made up of about 5,000 soldiers each – had been routed, with at least 10,000 soldiers killed and a similar number captured. The BBC tried to get comment from the Ethiopian National Defence spokesman, but he did not respond.

After recapturing most of Tigray in June, the TPLF launched an offensive in the neighbouring Amhara and Afar regions, while Mr Abiy called on all able-bodied Ethiopians to join the army and militias to help defeat the rebels.

“To halt the Tigray advance, the army organised [in Amhara] human-wave attacks by peasants, students and urban youth. They were passionate to defend their land but they only had basic training of a few weeks, and would charge TDF positions,” Prof De Waal said.

“Sometimes, the second wave wouldn’t even have guns. Thousands of them – possibly even tens of thousands – were killed by the TDF.”

“It creates a complicated human rights situation because it blurs the distinction between combatant and civilian. It also increases animosity between people – in this case Amharas and Tigrayans – and makes it more difficult to achieve peace and reconciliation.”

Mr Achamyeleh disputes this was a tactic, saying young men had to defend communities under attack from the rebels when no troops were around.

“They could not sit at home idly when the TPLF was going door-to-door to hunt down Amharas, massacring mothers and raping their daughters.”

In the latest move to regain the initiative, the federal government declared a state of emergency, giving it the power to conscript “any military age citizen who has weapons” and recalling retired officers to duty.

The Amhara regional government also announced its own measures, ordering the closure of all government offices and asking citizens to make their vehicles available.

Prof De Waal said the moves were unlikely to be effective.

“They can mobilise large numbers but the command-and-control structure of the army has disintegrated. An army is an institution built over years, with common purpose, common doctrines, and common practices.”

But Canada-based security expert Ann Fitz-Gerald believes the TPLF fighters have suffered much higher losses, saying it was the TPLF that was using “human waves” as a desperate measure to seize control of strategic routes and to acquire negotiating power.

The military is currently holding its position, Prof Fitz-Gerald says, with local reports suggesting that it has thwarted 12 attempts by the TPLF to take Mille – a town close to the road that leads to the ports of Djibouti – access which is vital for the landlocked country.

The TPLF is also involved in an offensive aimed at putting Addis Ababa – which has a population of more than five million – under siege.

“The TPLF wants to put the government under pressure to negotiate. I don’t think they will enter Addis Ababa. They are very unpopular there,” says Mr Samuel.

Prof De Waal says the government faces a “military defeat, but the TPLF cannot claim victory because winning is political.

“They need support and the co-operation of a sufficient number of political actors, which they do not have.

“So there will have to be negotiations, and the TPLF’s focus will be on securing the future of Tigray.”