[Note: videos are embedded in the original report]

Since a conflict broke out in Ethiopia’s northern Tigray region last year, access has been severely limited to journalists and aid agencies alike. The BBC’s Kalkidan Yibeltal has finally been allowed in to the region, where he witnessed a dire humanitarian situation.

Every day the city of Shire takes in even more uprooted lives.

Six-year-old Betlehem Tesfaye, who fled from near Aksum, about 50km (31 miles) to the east, lost both her legs in the conflict. Her mother was killed in the same explosion.

Her father spent his savings on her treatment. And now he does not know how he can get prosthetic legs for her.

Like other cities and towns across Tigray, Shire has become a haven for hundreds of thousands of vulnerable people forced from their homes by a conflict marked by accusations of human rights violations that include massacres and systematic rape.

But this city of 170,000 people, in the central part of the region, is particularly struggling.

Shire has seen a huge influx of people over the past four months, and it was ill prepared.

Its schools and a university campus have become theatres of suffering.

Aid agencies estimate some 200,000 people are currently living in the city’s makeshift camps. Many of them are women and children.

The first arrivals came back in November when fighting broke out. They mostly came from the southern and south-western lowlands of Tigray that were hotbeds of the fighting in the early days.

The conflict was a result of long-simmering tensions between Prime Minister Abiy Ahmed’s federal government and the region’s former rulers, the Tigray People’s Liberation Front (TPLF) – the dominant force in Ethiopian politics until Mr Abiy came to power in 2018.

After Mr Abiy declared a military offensive following an attack on an army base in the region’s capital, Mekelle, the fighting broke out on multiple fronts and involved several different forces.

In south and south-western Tigray armed forces from the neighbouring Amhara region joined the federal army against the TPLF.

She lived in a town called Dansha, supported by her two daughters and their families. Ms Atsede, her daughters, their husbands and her grandchildren are all now living in one of Shire’s camps.

When they fled their homes with little to no money to hand, they did not know where they would end up.

They walked when it was necessary; they used some of the many lorries and buses packed with people who had suffered a similar fate when they could.

“We couldn’t rest,” she says. They were thirsty and hungry. “You beg [for] a piece of bread and give that to a child. We borrowed cups to give water to children.”

She says she saw dead bodies lying unburied along the way – an image she would find difficult to forget.

We are not happy, she tells me, but we are still alive. “Days come and go. We are lucky we are not dead.”

Some aid is being provided in the camps. But the people say it is not enough.

Tigray’s interim administration, appointed by the federal government after the TPLF was ousted from power, says some four million people are in need of aid in the region – more than half of Tigray’s population.

More than a million are displaced.

Etenesh Nigussie, the administration’s spokesperson, says donors and humanitarian agencies need to step up their efforts.

There have been global calls for unrestricted humanitarian access.

“Now [aid agencies] are allowed to come in and help. Now is the right time,” she told me in Mekelle, standing in front of a marble-walled building once occupied by TPLF leaders.

“We expect them to give us all the necessary help and rescue our people – in addition to the aid being provided by the government.” 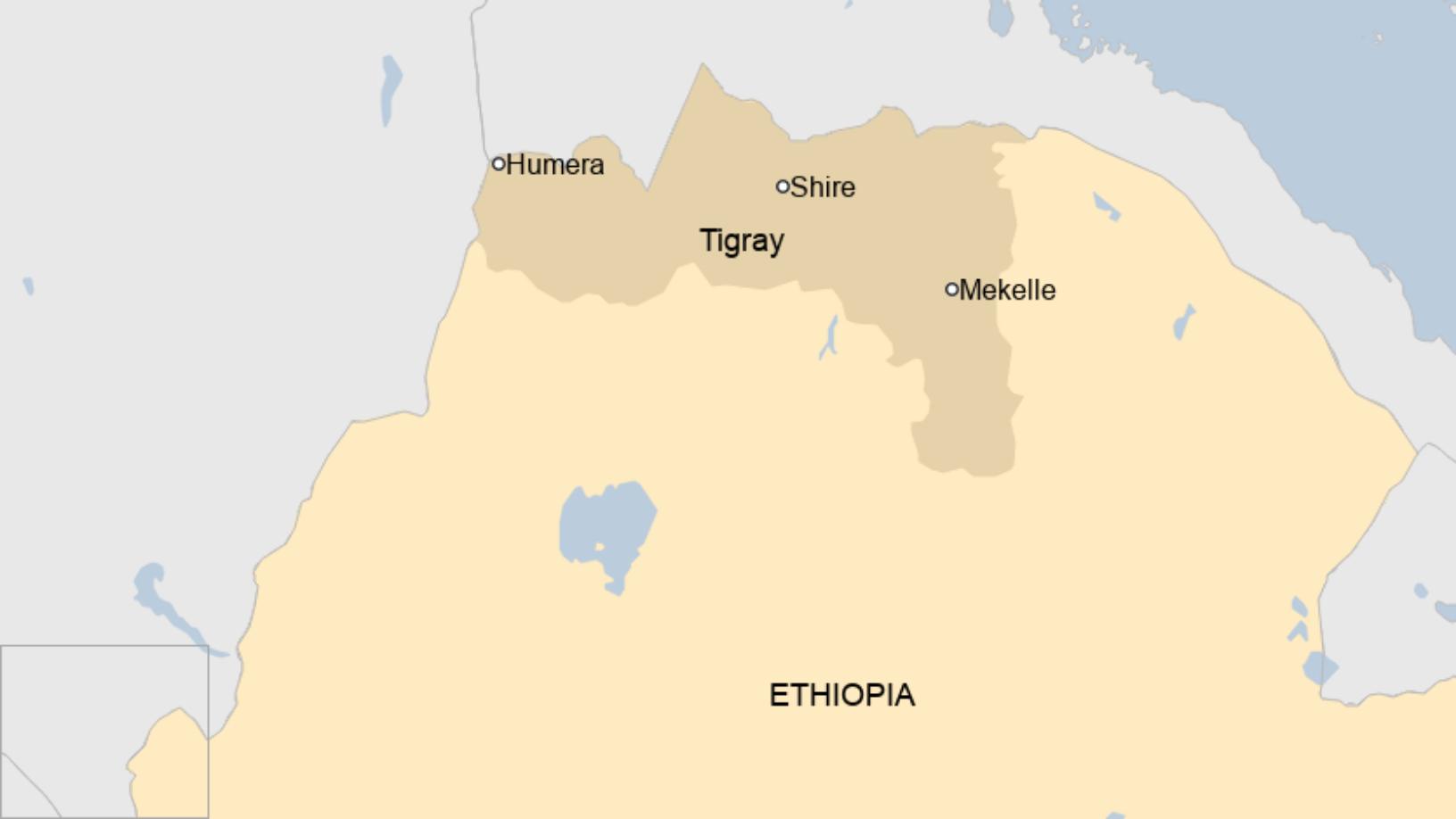 Back in Shire, I meet Leteberhan Assefa, who came from Humera, a small town 450km away, near Ethiopia’s border with Sudan and Eritrea.

Shortly before the conflict began, her daughter had a caesarean and when they fled she had to nurse her recovering daughter and carry the new-born baby. In the camps, she says she has felt relatively safe but not cared for.

More on the Tigray conflict:

Despite this precarious existence, thousands are still arriving in Shire in overcrowded buses, lorries and even horse carts.

This is because though the federal government managed to take control of a large portion of Tigray within weeks, security is still volatile with reports of sporadic fighting in some areas.

A state of emergency remains in place with a night-time curfew and multiple checkpoints for travellers within the region.

But however the fighting is resolved, the wounds could take years to heal.

For some, the scars will last forever.